Air Circuit Breaker (ACB) is an electrical device used to provide Overcurrent and short-circuit protection for electric circuits over 800 Amps to 10K Amps. These are usually used in low voltage applications below 450V. Air break circuit breaker the arc is initiated and extinguish in substantially static air in which the arc moves. Such breakers are used for low voltages, generally up to 15KV and rupturing capacities of 500MVA. Air circuit breaker has several advantages over the oil, as an arc quenching medium.

In the air break, circuit breaker the contact separation and arc extinction take place in air at atmospheric pressure. In air break circuit breaker high resistance principle is employed. In this circuit breaker arc is expanded by the mean of arc runners, arc chutes, and arc resistance is increased by splitting, cooling and lengthening 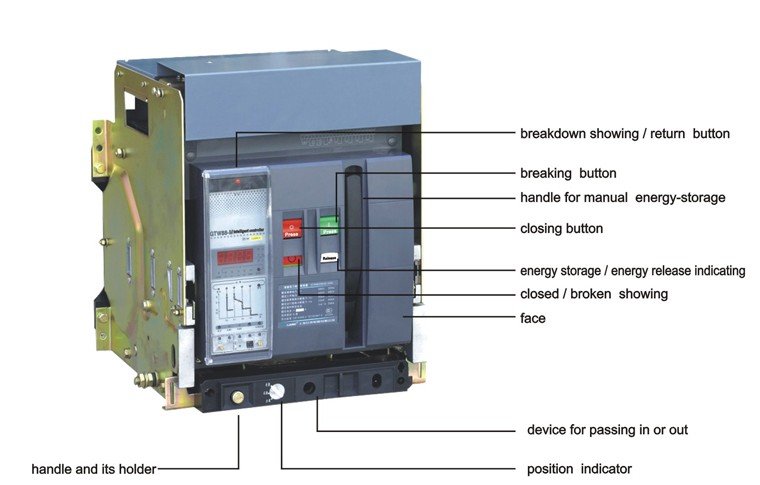 ACB has two sets of contacts i.e. main and auxiliary contacts. Each set of contact consists of a fixed contact and a moving contact. The main contact normally carries most of the load current. All the contacts are made of cadmium-silver alloy which has very good resistance to damage by arcing. When the ACB is closed, the powerful spring is energized and the ACB is than latched shut against spring pressure. The auxiliary contact makes first & breaks last i.e. when ACB is closed, the auxiliary contact closes first then the main contact follows.

The main contact closing pressure is kept high so that the temperature rise in the contacts while carrying current remains within limit. Closing coil operating on D.C voltage from a rectifier is provided to close the circuit breaker by operating a push button.

The air circuit breaker, operated within the voltage level 1 KV, does not require any arc control device. Mainly for heavy fault current on low voltages (low voltage level above 1 KV) ABCs with appropriate arc control device, are good choice. These breakers normally have two pairs of contacts. The main pair of contacts carries the current at normal load and these contacts are made of copper. The additional pair is the arcing contact and is made of carbon. When circuit breaker is being opened, the main contacts open first and during opening of main contacts the arcing contacts are still in touch with each other. As the current gets, a parallel low resistive path through the arcing contact during opening of main contacts, there will not be any arcing in the main contact. The arcing is only initiated when finally the arcing contacts are separated. The each of the arc contacts is fitted with an arc runner which helps, the arc discharge to move upward due to both thermal and electromagnetic effects as shown in the figure. As the arc is driven upward it enters in the arc chute, consisting of splitters. The arc in chute will become colder, lengthen and split hence arc voltage becomes much larger than system voltage at the time of operation of air circuit breaker, and therefore the arc is quenched finally during the current zero.