Generally there are two types of Armature winding in the DC machines. They are classified as follow, 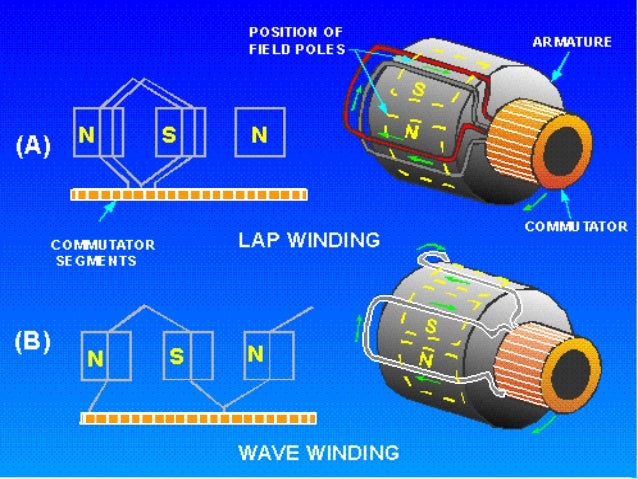 The difference between these two is merely due to the end connections and commutator connections of the conductor. To know how armature winding is done, it is essential to know the following terminologies –

Armature winding can be done as single layer or double layer. It may be simplex, duplex or multiplex, and this multiplicity increases the number of parallel paths. 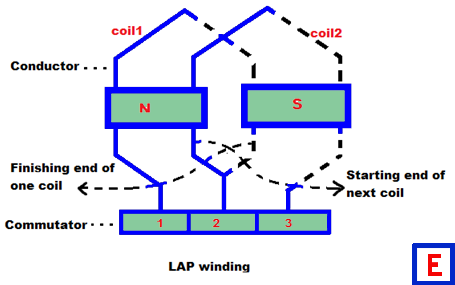 Lap Winding: This type of winding is used in dc generators designed for high-current applications. The windings are connected to provide several parallel paths for current in the armature. For this reason, lap-wound armatures used in dc generators require several pairs of poles and brushes.
In wave winding, a conductor under one pole is connected at the back to a conductor which occupies an almost corresponding position under the next pole which is of opposite polarity. In other words, all the coils which carry emf in the same direction are connected in series. The following diagram shows a part of simplex wave winding. 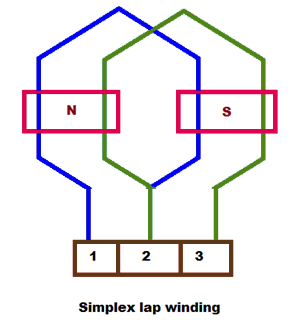 Wave Winding: This type of winding is used in dc generators employed in high-voltage applications. Notice that the two ends of each coil are connected to commutator segments separated by the distance between poles. This configuration allows the series addition of the voltages in all the windings between brushes. This type of winding only requires one pair of brushes.