Bonding is the lasting joining of metallic pieces to form a conducting path which ensures safe electrical continuity. Bonding is generally done as protection from electrical shocks. Any intentional or accidental connection between an electrical circuit or instrument and the earth is known as Grounding. Grounding ensures that all metal parts of an electrical circuit that an individual might contact are connected to the earth, thus ensuring zero voltage.

The purpose of bonding is as follows: 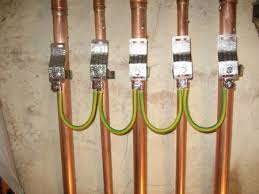 When bonded to the neutral bar at a breaker box, it facilitates the operation of the branch-circuit over-current device. If a conductive body that is not so bonded becomes energized due to a chafing wire or other electrical fault, the over-current device will not open the circuit because there is no flow of fault current through it. If the metal body is contacted by an individual who is grounded (as is usually the case), there will be a severe shock hazard.

The purpose of grounding is to:

• Drain transient voltages (such as caused by lightning or fallen power lines) out of the system.

It could be said that bonding is more critical than grounding, although that would be misleading because both are essential for a safe electrical system. Some manufacturers suggest that certain types of electrical equipment such as parking lot light fixtures on metal poles should be connected to local ground rods. This is unnecessary and erroneous where these grounding electrodes would not have low-impedance connections back to the grounding means at the electrical service.