Also you can read: What is SCR

Thus, the definition of semiconductor can be as follows.

The materials that are neither conductor nor insulator with energy gap of about 1 eV (electron volt) are called semiconductors.

Most common type of materials that are commercially used as semiconductors are germanium (Ge) and silicon (Si) because of their property to withstand high temperature. That means there will be no significant change in energy gap with changing temperature. The relation between energy

gap and absolute temperature for Si and Ge are given as,

At room temperature resistivity of semiconductor is in between insulators and conductors. Semiconductors show negative temperature coefficient of resistivity that means its resistance decreases with increase in temperature. Both Si and Ge are elements of IV group i.e. both elements have 4 valence electrons. Both form the covalent bond with the neighboring atom. At absolute zero temperature both behave as insulator i.e. the valence band is full while conduction band is empty but as the temperature is raised more and more covalent bonds break and electrons are set free and jump to the conduction band. 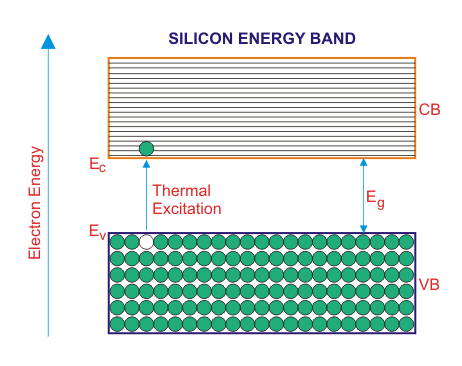 In the above energy band diagrams of a semiconductor. CB is the conduction band and VB is the valence band. At 0oK, the VB is full with all the valence electrons.