A generator is subjected to electrical traces imposed on the insulation of the machine, mechanical forces acting on the various parts of the machine, and temperature rises. These are the main factors which make protection necessary for the generator or alternator. Even when properly used, a machine in its perfect running condition does not only maintain its specified rated performance for many years, but it does also repeatedly withstand certain excess of over load.
Hence, preventive measures must be taken against overloads and abnormal conditions of the machine so that it can serve safely. Despite of sound, efficient design, construction, operation, and preventive means of protection, the risk of that fault cannot be completely eliminated from any machine. The devices used in generator protection, ensure the fault, made dead as quickly as possible. 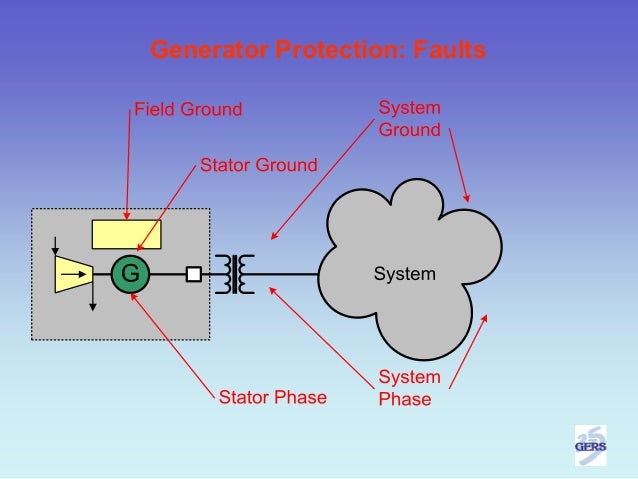 An electrical generator can be subjected to either internal fault or external fault or both. The generators are normally connected to an electrical power system, hence any fault occurred in the power system should also be cleared from the generator as soon as possible otherwise it may create permanent damage in the generator. The number and variety of faults occur in generator, are huge. That is why generator or alternator is protected with several protective schemes. The generator protection is of both discriminative and non-discriminative type. Great care is to be taken in coordinating the systems used and the settings adopted, so that the sensitive, selective and discriminative generator protection scheme is achieved.

The various forms of protection applied to the generator can be categorized into two manners,

Other than protective relays, associated directly with the generator and its associated transformer, there are lightning arrestors, over speed safe guards, oil flow devises and temperature measuring devises for shaft bearing, stator winding, transformer winding and transformer oil etc. Some of these protective arrangement are of non-trip type i.e. they only generate alarm during abnormalities. But the other protective schemes ultimately operate master tripping relay of the generator. This should be noted that no protective relay can prevent fault, it only indicates and minimizes the duration of the fault to prevent high temperature rise in the generator otherwise there may be permanent damage in it. It is desirable to avoid any undue tresses in the generator, and for that it is usual practice to install surge capacitor or surge diverter or both to reduce the effects of lightning and other voltage surges on the machine.
The protection schemes usually applied to the generator are discussed here below in brief.

The main protection provided in the stator winding against phase to phase or phase to earth fault, is longitudinal differential protection of generator. Second most important protection scheme for stator winding is inter turn fault protection. This type of protection was considered unnecessary in previous days because breakdown of insulation between points in the same phase winding, contained in the same slot, and between which a potential difference exists, very rapidly changes into an earth fault, and then it is detected by either the stator differential protection or the stator earth fault protection. A generator is designed to produce relatively high voltage in comparison to its output and which therefore contains a large number of conductors per slot. With increasing size and voltage of the generator, this form of protection is becoming essential for all large generating unit.

When the stator neutral is earthed through a resistor, a current transformer is mounted in the neutral to earth connection. Inverse Time Relay is used across the CT secondary when the generator is connected directly to the bus bar. In case of generator feeds power via a delta star transformer, an Instantaneous Relay is used for the same purpose. In the former case, the earth faults relay is required to be graded with other fault relays in the system. This is the reason why Inverse Time Relay is used in this case. But in the letter case, the earth fault loop is restricted to the stator winding and primary winding of the transformer, hence, there is no need of grading or discrimination with other earth fault relays in the system. That is why Instantaneous Relay is preferable in the case.

A single earth fault does not create any major problem in the generator but if the second earth fault is occurred, however, part of the field winding will become short-circuited and resulting and unbalanced magnetic field in the system and consequently there may be major mechanical damage to the bearings of the generated. There are three methods available to detect the types of fault in the rotor. The methods are

Unbalancing in loading produces negative sequence currents in the stator circuit. This negative sequence current produces a reaction field rotating at twice of synchronous speed with respect to the rotor and hence induce double frequency current in the rotor. This current is quite large and causes overheating in the rotor circuit, especially in the alternator. If any unbalancing occurred due to fault in the stator winding itself, that would be cleared instantaneously by the differential protection provided in the generator. If the unbalancing is occurred due to any external fault or unbalanced loading in the system, it may remain undetected or may persist for a significant period of time depending on the protection coordination of the system. These faults then be cleared by installing a negative phase sequence relay with the characteristics to match the withstand curve of the machine.

This protection, usually in the form of a regulator which compares the vacuum against atmospheric pressure, it is normally fitted to the generator set above 30 MW. The modern practice is for the regulator to unload the set via the secondary governor until normal vacuum conditions are restored. If the vacuum conditions do not improve below 21 inch the stop valves are closed and the main circuit breaker is tripped.

This protection is not considered essential since the lubrication oil is normally obtained from the same pump as governor oil and a failure of the governor oil will automatically make stop valve to close.

Protection against Loss of Boiler Firing

Two methods are available for detecting the loss of boiler firing. In the first methods, normally opened (NO) contacts are provided with the fan motors which may trip the generator if more than two motors fail. The second methods uses a boiler pressure contacts which unload the generator in boiler pressure falls below approximately 90%.

If the prime mover fails to supply mechanical energy to the generator, the generator will continue to rotates in motoring mode that means it takes electrical energy from the system instead of supplying it to the system. In steam turbine set the steam acts as a coolant maintaining the turbine blades at a constant temperature. Failure of the supply will therefore result in overheating due to friction, with subsequent distortion of turbine blades. The, failure of steam supply can cause severe mechanical damage in addition of imposing a heavy motoring load on the generator. Reverse power relay is used for this purpose. As soon as the generator starts rotating in motoring mode, the reverse power relay will trip the generator set.

While it is the general practice to provide mechanical over speed devises on both steam and hydro turbine, which operate directly on the steam throttle valve or main step valve, it is not usual to backup this devises by an over speed relay on steam driven sets. It is, however, considered good practice on hydroelectric units, as the response of the governor is comparatively slow and the set is more prone to over-speed. The relay when fitted is usually supplied from the permanent magnet generator used for the control of governor.

The cooling rates following shutdown, at the top and bottom of the turbine casing, are different and this uneven temperature distribution tends to cause destruction of the rotor. To minimize the disruption, it is common practice to turn the rotor at low speed during the cooling down period. In the view of the forces involved with large modern rotor, it is now standard practice to fit shaft eccentricity detectors.

Protection against Difference in Expansion between Rotating and Stationary parts

During the running up period, the rate of heating of the rotor differs from that of the casing, due to the difference in mass. As a result, the rotor expands at a different rate to the casing and it is necessary to overcome this unequal expansion. To this end, proposition is made on the larger machine for independent supplies of steam to be set to certain joints on the casing. It is desirable therefore to provide a means of measuring the axial expansion to assist the operator to feed the steam to the correct points and also to provide indication of any dangerous expansion. The shaft axial expansion detector is basically similar to the equipment described for rotor distortion equipment, except that the detector magnets are fixed to the turbine casing.

Vibration detectors are usually mounted on the bearing pedestals. The detector consists of a coil mounted on springs between U shaped permanent magnets. The voltage output from the coil, which is proportional to the degree of vibration, is passed from the coil into integrating circuits and then into interval indicating instrument.

Back up Protection of Generator

Back up protection should always be given in highly rated machine like synchronous generator or alternator. If faults occurred had not been cleared by the appropriate protection scheme then back up protection relays should be operated to clear the fault. Over current relays are generally used for this purpose. Because the synchronous reactance of modern machine is often greater than hundred percent, the sustained fault current fed from the machine into an external fault is invariably below the normal full load current. The normal IDMTL relays would not prove satisfactory because they are current settings must be close to the full load and their time sitting short if operation is to be obtained, resulting in probable lack of discrimination with other over current relays in the system. Father, the over current relay would most probably operate for loss of field on the machine, disconnecting it prematurely. To overcome this problem is it has become customary to apply an over current relay in combination with under voltage relay.