A material or an object that does not easily allow heat, electricity, light, or sound to pass through it.  Air, cloth and rubber are good electrical insulators feathers and wool make good thermal insulators. The overhead line conductors are supported on the poles/ turns with the help of insulator to prevent the flow of current to earth. Thus the insulator plays an important part in the successful operation of the lines. In general, the insulator should have the following properties:-

Porcelain is the most common materials is used for insulator, but glass , steatite and special composition materials are also used.

The porcelain is manufactured from china clay which in nature in the form of aluminum silicate. It is mixed with plastic Kaolin, feslpar and quartz and mixture is heated in a kiln at a controlled temperature. The insulator so obtained must be hard, smooth, glazed and free from porosity, due to the glaze of the material its surface will be free from traces of water. A mechanically sound porcelain insulator has a dielectric strength of about 60KV per c.m of its thickness and its compressive and tensile strength are 70,000 Kg /c.m 2 and 500 Kg /c.m 2. 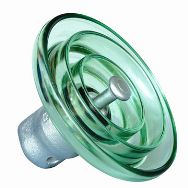 Many time glass is used as insulating material. The glass is made tough by annealing. And glass type insulator has the following advantage:-

The main disadvantage are:
The moisture easily condenses over the surface, due to which dirt will deposit on its surface and it will help to the leakage of currents. For higher voltages, the glass cannot be cast in irregular shapes since due to irregular cooling and internal strains are caused.

The steatite is a magnesium silicate found is various proportions of magnesium oxide and silica in many parts of the world. IT has high tensile strength as compared to porcelain insulator. These type insulators are used in transmission line when transmission lines take sharp turns. 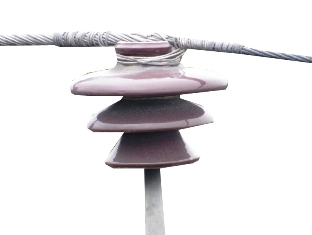 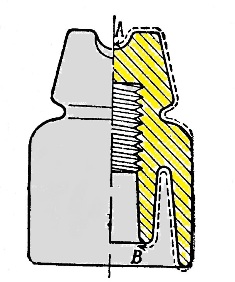 ii) The porcelain insulator has coarse threads but they are lined with a soft material into which the coarse steel pin is screwed. This method is generally adopted.
iii)Into the coarse threaded porcelain, the insulator is screwed the steel bolt with a lead head. There is a groove on the upper end of the insulator for housing the conductors. The conductors pass through this grove and is bound by the annealed wire of the same material as the conductor.
Pin type is used for transmission and distribution of electric power at the voltage up to 50 KV.

Insulator are required to withstand both mechanical and electrical stresses. The electrical breakdown of the insulator can occur either flash-over or puncture. In flash over, an arc occurs between the line conductor and insulator pin (i.e. earth )and the discharge jumps across the air gaps, following shortest distance ( i.e.  a+b+c+d ) for the insulator which is shown in the figure. 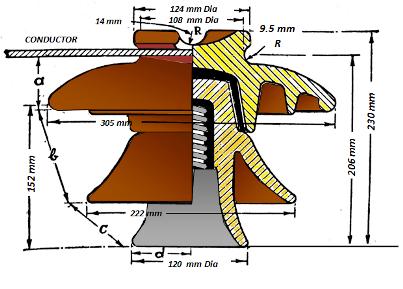 When the insulator are wet their outer surface is almost conducting so their flashover distance is = (b+c+d) . It is seen that the flashover distance when the insulators are wet is less and to keep the inner side of the insulator dry. During rain, the rain sheds are made in the order that these rain sheds should not disturb the voltage distribution they are so designed that their surface at right angles to the electrostatic lines of force on. The electrostatic lines both when dry and wet are shown in the figure. 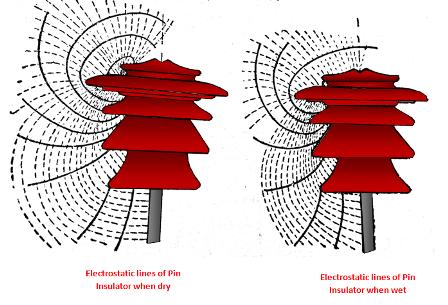 In the case of puncture , the discharge occurs from conductor to pin through the body of the insulator. When such breakdown is involved, the insulator is permanently destroyed due to excessive heat. In practice, sufficient thickness of porcelain is provided in the insulator to avoid puncture strength to flash-over voltage is known as the safety factor. 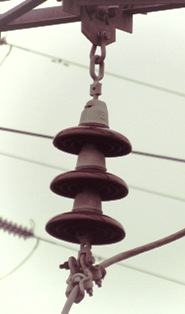 As the line voltage increase, the pin insulators to be used become heavy and complicated in construction also its cost increase. Further, the replacement of the damaged insulator will cost more. So, pin insulator is not an economical problem for higher voltage. For higher voltage suspension insulator is used, a number of them are connected in series by metallic links to form a chain and the line conductors are carried by the bottom-most insulator. The advantage of this type insulator are given below:- Each suspension insulator is designed for 11 KV, so by connecting a number of such insulators a string of insulators can be designed for any required voltage. If any one of the insulator in the string fails, it can be replaced easily and at a lesser cost. The mechanical stresses on the string decrease since the line suspended are flexible. When the string of the insulator is used in conjunction with the steel towers, the line conductors are lower than the cross arm which is earthed and acts as a lighting arrestor.

It is one of the earliest designs, and consists of one porcelain disc. The central top portion of the insulator consists of two curved tunnels, the planes of which are at right angles to each other. Lead covered steel U links are passed through these tunnels and is bolted to the two similar units at top and bottom as shown in fig. The advantages of this type of insulators are – i) Its design is simple. ii ) No cement etc is required. The porcelain in between the two tunnels is under compression only and provides high mechanical strength to the insulator. If by any accident the porcelain breaks, the line conductors do not fall. The only disadvantage of this insulator is that the porcelain in between two links is under the greatest electrostatic stress due to which it is liable to puncture.

It consists of a porcelain disc insulator which is grooved at the bottom in order to increase the flashover distance. At the top of the insulator is cemented a galvanized cast iron cap. In the hollow cavity of the insulator is cemented galvanized forged steel pin, the lower enlarged end of this steel pin fits into the cavity of the steel cap of the lower suspension insulator and forms a ball and socket connection. The main disadvantage in this type of insulator is that cubical ex-pensions of the three materials – iron, porcelain, and cement — are different and no provision is made for their expansion and due to this insulator fail.

Core and link type insulator: It is a combination of both the above types of suspension insulators. In this, the advantages of Hewiiett and cemented cap type insulators have been grouped together. In this type, each insulator disc is symmetrically placed and conforms to electrostatic lines of force. This is the most recent type of construction and it permits the disc to be formed out of quite thick porcelain thereby allowing the disc to be of one piece only. The other important advantage is that it has high puncture strength.

For low voltage lines, the stays are to be insulated from the ground at a height not less than 13 meters from the ground. The insulator used in the stay wire is called as the stay insulator and is usually of porcelain and is so designed that in a case of breakage of the insulator the guywire will not fall to the ground.

In early days, the shackle insulators were used as strain insulator. But, now days, they are frequently used for low voltage distribution lines. Such insulator can be used either in a horizontal position or in a vertical position. They can be directly fixed to the pole with a bolt or to the cross arm. In the fig. shows, a shackle insulator fixed to the pole. The conductors in the groove is fixed with a soft binding wire.