Today we are going to talk about topic which one kills human body either voltage or current. before going to the subject, first we should know what is voltage and current.

voltage is also called electromotive force, is a quantitative expression of the potential difference in charge between two points in an electrical field. Voltage is symbolized by an uppercase italic letter V or E. The standard unit is the volt, symbolized by a non-italic uppercase letter V. Voltage can be direct or alternating. A direct voltage maintains the same polarity at all times. In an alternating voltage, the polarity reverses direction periodically. It’s not the voltage that kill you its the current only kill the human body. Naturally our human body is contain  some basic electrical things. that is,
1. Voltage
2. current
3. Resistance
the below table clearly explain the effect of current in the human body,

Major parts of our body skin is act as resistance. the resistance is nothing but the opposition that a substance offers to the flow of electric current. so normal human body having the resistance value 100000 ohms. so human body can withstand >30 volts. if voltage is increase then resistance will be reduce.

for example 440 volts flow through our body then our skin is broken and electricity will pass easily.

suppose our skin in wetness then our resistance value will be reduced to 1000 ohms only. 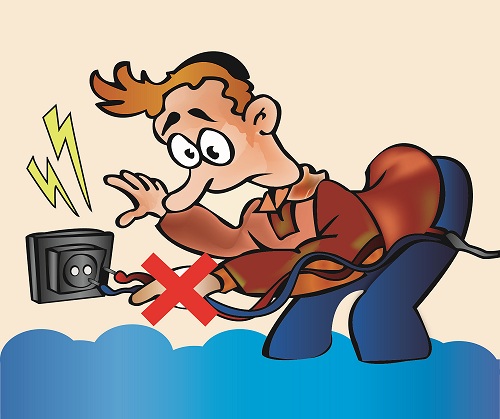 so don’t touch any electrical panel/parts whether your skin in wet condition.