Generator is the important power supply equipment to generated electricity. Without electricity, we cannot operated machinery, equipment, lighting, computer and others device for our living. For general power supply, power distributor normally used the high capacity of generator to supply the electricity to the consumer. It different size for backup power supply that used for hospital, server room, critical equipment or important area.

Generators are generally classified in accordance with speed and construction. We can categories the generator with following types. 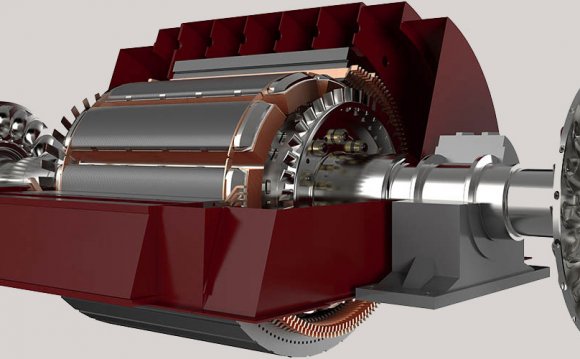 Basic design for hydro generator is used the low speed machines with large diameter and combine with short axial length. Generally it have a vertical spindle with the generator mounted above the turbine.

This type normally driven by gas or steam to operated the turbines. The power outputs range normally from a few MW up to 1300MW.We can found it at oil and gas industry, palm oil manufacture and other sector for generated electricity power supply. Basic operation is it have  two-pole machines having cylindrical rotors in which the field winding is housed in axial slots. For the cooling system, it have several method such as cooled by circulating air directly from external atmosphere or using an enclosed circuit water heat exchangers.

For the largest ratings, Common method is cooled by circulating of hydrogen gas and the stator winding cooled by cooling water through center of the winding conductors. This water must be demineralized in order to have the high resistivity necessary to insulate these from the high voltage between the stator windings and the earthed heat exchangers.

This types is common used and are widely operated for standby power supplies for critical or important area during power failure. It also used for suppliers for rural areas without electricity power supply. It design with portable concept for  easier transportation and handling.

The prime mover is a diesel engine to driven a salient pole machine until 1500 rpm. It can generated the power supply until 12 MW with running at the lower speed.

The design for induction generator are similar with induction motor design. The different is it can draw their magnetizing current from the power system. This types can generate an output when driven at a speed slightly greater than synchronous speed and have ratings not normally greater than about 3MW running at up to 1000 r.p.m.