Stepper motor is a special type of synchronous motor which is designed to rotate a specific number of degrees for every electric pulse received by its control unit. Typical steps are 7.5 or 15 degree per pulse. It is a motor that can rotate in both directions, move in precise angular increments, sustain a holding torque at zero speed, and be controlled with digital circuits. It moves in accurate angular increments known as steps, in response to the application of digital pulses to the electric drive circuit.

Generally, such motors are manufactured with steps per revolution. Depending on its electrical power supply, it may be:

A- Unipolar: if its coils are always supplied in the same direction by a single voltage, it requiring only one power source, hence the name unipolar.

Stepper motors, unlike ordinary DC motors, are brushless and can divide a full 360° into a large number of steps, for example 200. 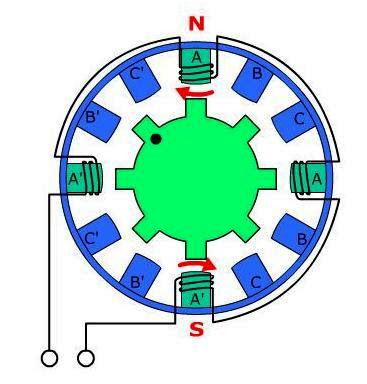 Stepper motors operate differently from normal DC motors, which rotate when voltage is applied to their terminals. Stepper motors, on the other hand, effectively have multiple “toothed” electromagnets arranged around a central gear-shaped piece of iron. The electromagnets are energized by an external control circuit, such as a micro controller.

Some of the disadvantages of stepper motors in comparison with servo motors are as follows: