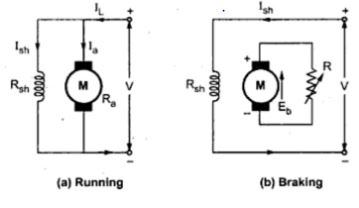 (i) Rheostatic or dynamic braking,

(i) Rheostatic or dynamic braking:

In case of DC shunt motors, armature is disconnected from the supply and a rheostat (variable resistor) is connected across it. The field winding is left connected across the supply. Obviously, now armature is driven by the inertia and hence machine starts acting as a generator. Thus the machine will now feed the current to the connected rheostat and heat will dissipate at the rate of I2R. Braking effect is controlled by varying the resistance connected across the armature.
In case of DC series motor, motor is disconnected from the supply and field connections are reversed and a rheostat is connected in series. The field connections are reversed to make sure that the current through field winding will flow in the same direction as before.

In this method, armature connections are reversed and hence motor tends to run in opposite direction. Due to reversal of the armature terminals, applied voltage V and back emf Eb starts acting in the same direction and hence the total armature current exceeds. To limit this armature current a variable resistor is connected across the armature. This is similar for both series and shunt wound methods.
Plugging gives greater braking torque as compared to rheostatic braking. This method is generally used in controlling elevators, machine tools, printing presses etc.

Regenerative braking is used where, load on the motor has very high inertia (e.g in electric trains). When applied voltage to the motor is reduced to less than back emf Eb, obviously armature current Ia will get reversed, and hence armature torque is reversed. Thus speed falls. As generated emf is greater than applied voltage (machine is acting as a DC generator), power will be returned to the line, this action is called as regeneration. Speed keeps falling, back emf Eb also falls until it becomes lower than applied voltage and direction of armature current again becomes opposite to Eb.